How to Avoid Common Test Automation Challenges and Failures?

Today’s businesses need high-quality software with faster time-to-market to beat the competition, which has increased the adoption of test automation. Businesses across industries leverage test automation, saving human effort and time by automating repetitive tasks and helps achieve test automation services for clients faster releases and quality software. However, testers make common mistakes while performing test automation, leading to its failure and significantly impacting business ROI. Therefore, it is essential to know the various common test automation challenges and how testers can overcome them in this blog.

An overview of test automation 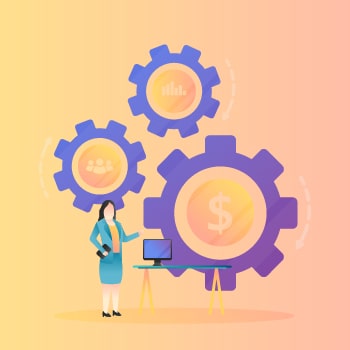 Test automation is a technique of software testing wherein test automation frameworks and tools are used for executing the tests. Unlike manual testing, test automation does not require much human help as everything is performed automatically. The main aim of automation testing is to reduce the human effort consumed in performing mundane and repetitive tasks.

Test automation reduces regression testing time and speeds up the test execution process. This ultimately saves a lot of time, effort, and money.

There is no one-size-fits-all approach for automation testing strategy as it differs from business to business. Therefore, testers face challenges in preparing the right test automation strategy.

It is one of the common challenges as testers who have just started their journey tend to keep high expectations from test automation and altogether avoid manual testing.

Test automation requires a high initial investment cost as purchasing tools, and building frameworks might involve some investment. While later, there will not be any further cost involved, and reusable test assets can be easily created and maintained.

Today, users access apps with OS and platform combinations from different devices. Testers must test applications on all these devices and OS, making test automation quite challenging.

One of the significant challenges that testers face with test automation is false positives and negatives, resulting in flaky tests.

Another challenge that testers face during test automation is the lack of seamless team collaboration. This usually happens when developers and testers work separately on a project and might not have a proper communication channel.

How to overcome the above-stated test automation challenges? 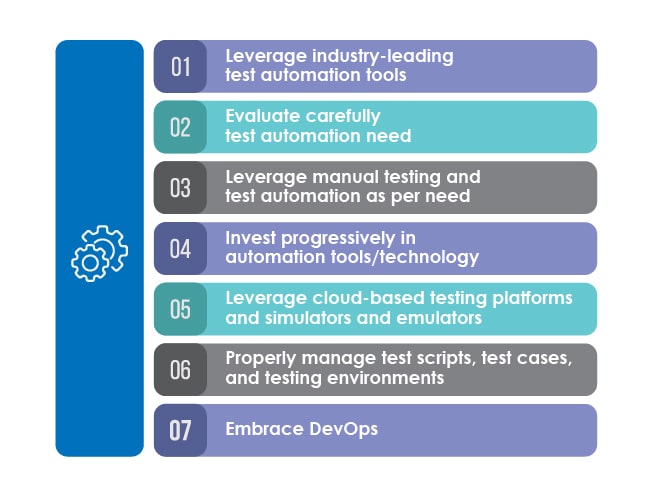 It is always advised to go for industry-leading tools as they are trusted and used by several leading companies to overcome the challenge of selecting the right automation testing tool. Moreover, these tools come with excellent community support.

3. Leverage manual testing and test automation as per need:

It is always best to adopt a combination of manual and automated testing to overcome the challenge of setting high-expectation from test automation. Not all situations demand automation testing.

It is best to invest progressively and adopt automation tools/technology rather than investing all at once to overcome the challenge of high initial investment costs.

It is best advised to leverage cloud-based testing platforms and simulators and emulators rather than sourcing real devices to overcome the challenge of testing an app in a diverse environment.

It is always suggested to properly manage test scripts, test cases, and testing environments to overcome the challenge of flaky tests caused due to false positives or false negatives.

It is advised to embrace and adopt DevOps processes that break the silos between developers and testers and ensure seamless collaboration to overcome the challenge of poor team collaboration.

What are some tester’s errors that cause test automation failures?

One of the common mistakes that testers make during test automation is trying to automate almost everything possible. However, in reality, 100% automation of test cases is not possible as some test cases should be performed manually.

4. Being rigid with testing order:

If the testers are not flexible with the testing order and try to follow the same testing order for every test case and project, it might not work well and lead to test automation failure.

5. Selecting the tool just because it is open-source:

Sometimes testers choose open-source tools because they are free. But it is not the right approach for tool selection, which might also lead to test automation failure.

7. Not maintaining the test automation suite:

How can testers avoid the above-stated test automation errors? 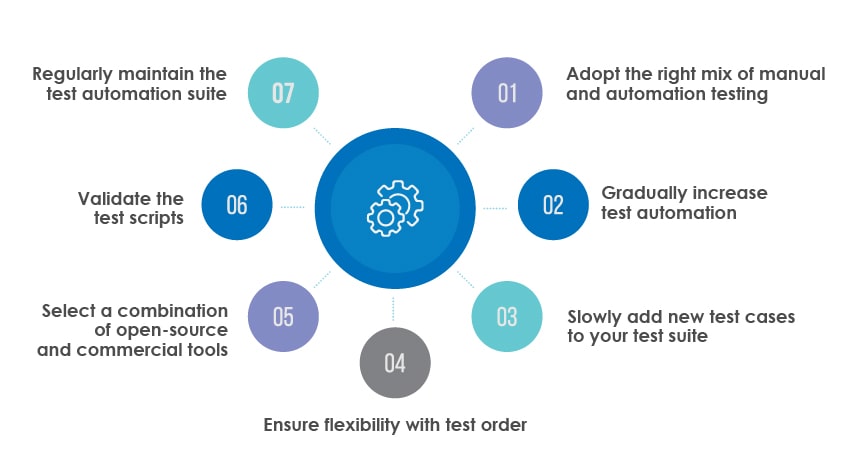 1. Adopt the right mix of manual and automation testing:

Testers should ensure the right combination of manual and automation testing and must not aim for 100% automation to reduce the chances of test automation failure.

Testers should not automate significant test cases in a single go and must slowly increase the intensity of test automation to ensure successful test automation.

Testers must not test multiple things in a single test case; instead, they should add new test cases gradually to their test automation suite.

Testing order does not matter during test automation; therefore, testers should ensure flexibility with the test order during automation.

5. Select a combination of open-source and commercial tools: 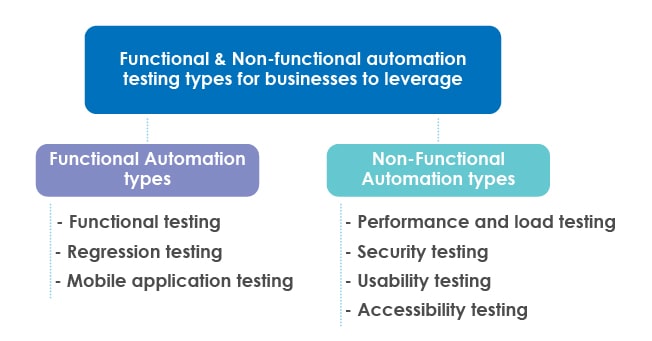 It is performed to verify the functionality of an application to ensure the app functions seamlessly and delivers a great customer experience.

It is performed to ensure no existing features are affected even after frequent changes in the software’s functionality.

In this testing type, several tests are performed on mobile apps to ensure their compatibility, functionality, and reliability across devices and OS.

This test is performed to check the speed, responsiveness, reliability, and stability of an app under fluctuating networks, bandwidths, and user loads.

The main aim of this test is to ensure that the applications are free from all vulnerabilities and security loopholes. The security tests are vulnerability tests, penetration tests, scanning, auditing, etc.

This test is performed to ensure proper app navigation, active links, and the proper usability of an app.

Business apps should be accessible to everyone, including people with specific disabilities like hearing loss, impaired vision, cognitive disabilities, etc. This testing method ensures that the app follows all accessibility guidelines like W3C’s WCAG 1.0/2.0/2.1/2.2, BITV 1.0, Section 508 & Stanca Act, etc.

This test method ensures equal access to apps for all and helps expand the user base.

It is an open-source RPA testing tool that can automate any desktop or web app. This RPA tool offers a complete suite for functional testing under one roof. The test suite contains StudioPro, Orchestrator, Test Management Hub, and Test Manager. UiPath can be hosted in virtual terminals or cloud environments and works well with .Net, Java, Flash, PDF, Legacy, SAP, etc.

It is an all-in-one test automation tool for desktop, mobile, and web. This tool allows codeless test automation and can be used for testing software functionality. This software testing tool supports cross-browser and cross-platform testing. Ranorex easily integrates with the DevOps pipeline.

It is a widely used test automation tool for mobile, desktop, and web. This tool supports various languages and can be used to perform keyword-driven and data-driven testing.

How can TestingXperts help to overcome your Test Automation Challenges? 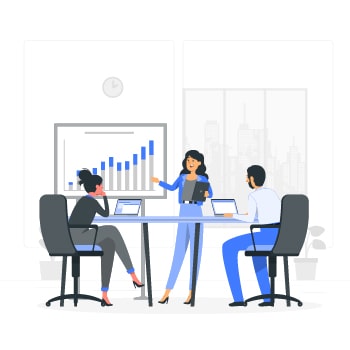 • TestingXperts (Tx) has enabled test automation services for majority of its clients across industries.

• Tx has expert QA teams with expertise in all leading open-source and commercial automation tools.

• Tx has an in-house extensible automation framework, Tx-Automate, (modular, reusable, and compatible) that can be customized based on the business need.

• Our test automation engineers have enabled the RPA UiPath Test Automation framework for global clients such as Spotify, a leading audio streaming company in Sweden and the US.

• Tx would be a one-stop solution for all your automation software testing needs. Get in touch with our automation experts to know more.