What is Test Automation Framework?

Techopedia defines Test Automation Framework as a set of guidelines for creating and designing test cases. It is a conceptual part of the automated testing that helps testers to use resources more efficiently.

A framework is defined as a set of rules or best practices that can be followed in a systematic way that ensures to deliver the desired results.

Typically, a broader description of test automation framework shows that it consists of a set of processes, tools, and protocols that can be collectively used for uat testing of software applications.

An automation testing framework is a platform developed by integrating various hardware, software resources along with using various tools for automation testing and web service automation framework, based on a qualified set of assumptions. This framework enables efficient design and development of automated test scripts and ensures reliable analysis of issues or bugs for the system or application under test (AUT).

The important functions of software testing automation frameworks are broadly defined as they are effectively used to identify objects and arrange them to be reused in test scripts, perform some action on these identified objects and further also used to evaluate these objects to get the expected results.

It can be inferred that a testing framework is an execution environment for automated tests which revolve around a set of assumptions, concepts, and practices that successfully support the designated process of automated testing.

Why do we use automation framework in test automation?

It is essential to use a framework for automated testing as it specifically improves the automation testing team’s efficiency and test speed. This automation testing framework also helps to improve test accuracy, and drastically reduces the test maintenance costs and lowers risks involved. Due to the numerous advantages of automation frameworks, test automation has become a fundamental component of today’s agile and DevOps practices.

What Is the purpose of a Test Automation Framework?

What is the need for Test Automation Framework for enterprises?

As mentioned, the test automation framework consists of a set of guidelines for creating and designing test cases. They form an important aspect of automated testing as it significantly helps testers to use resources effectively and efficiently. These automation frameworks also help to configure and create test suites by combining various automated tests and make them available for execution.

In general effective test automation support rigorous functional tests and also prove to be more useful as they require shorter design time. These automation testing frameworks ensure more consistency of automation across the organization and brings in higher developmental activity.

There has been a significant evolution of these  over the years and some of the important types of these frameworks are: 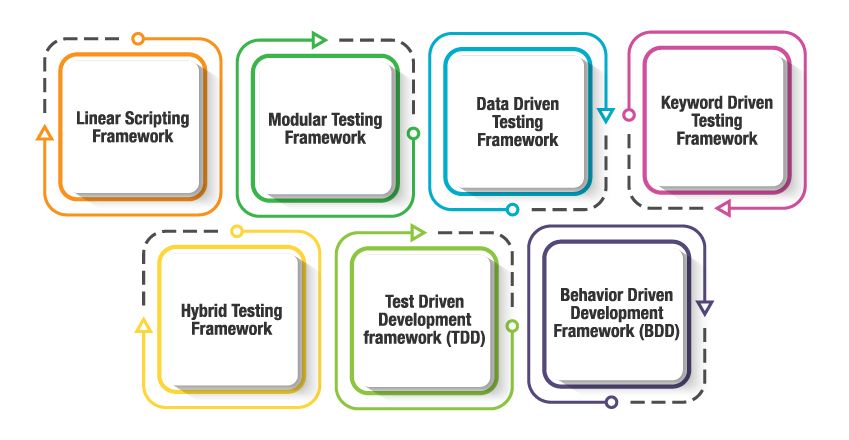 Typically, in this scripting driven framework, the creation and execution of test scripts is done individually and this framework is an effective way to get started for enterprises.

The automation scripting is done in an incremental manner where every new interaction will be added to the automation tests.

Abstraction is the concept on which this framework is built. Based on the modules, independent test scripts are developed to test the software. Specifically, an abstraction layer is built for the components to be hidden from the application under test.

This sort of abstraction concept ensures that changes made to the other part of the application does not affect the underlying components.

In this testing framework, a separate file in a tabular format is used to store both the input and the expected output results. In this framework, a single driver script can execute all the test cases with multiple sets of data.

This driver script contains navigation that spreads through the program which covers both reading of data files and logging of test status information.

Test driven development is a technique of using automated unit tests to drive the design of software and separates it from any dependencies. Earlier, with traditional testing a successful test could find one or more defects, but by using TDD, it increases the speed of tests and improves the confidence that system meets the requirements and is working properly when compared to traditional testing.

This has been derived from the TDD approach and in this method tests are more focussed and are based on the system behavior. In this approach, the testers can create test cases in simple English language. This simple English language helps even the non-technical people to easily analyse and understand the tests.

What are the major advantages of Automation Frameworks for Enterprises?

– Identifies defects early with effective detection of bugs and issues
– Ensures maximum test coverage as end-to-end automation testing frameworks are used
– Reduces manual efforts as tests are fully automated and need less manual intervention
– Most significant usage is with respect to code reusability
– Delivers greater efficiency as testing time consumed is reduced
– Automated scripts save lot of QA time and ensures quality is maintained and delivered
– Automated tests can run anytime,anywhere as the system runs them automatically
– Bug tracking reports deliver comprehensive reporting that is useful to DevOps teams
– With agile and DevOps, and continuous deployment, test automation and continuous integration is the key and pre-requisite to ensures continuous testing is achieved

What are the advantages enterprises get with Cloud test automation frameworks?

What are the steps for an effective Test Automation Approach? 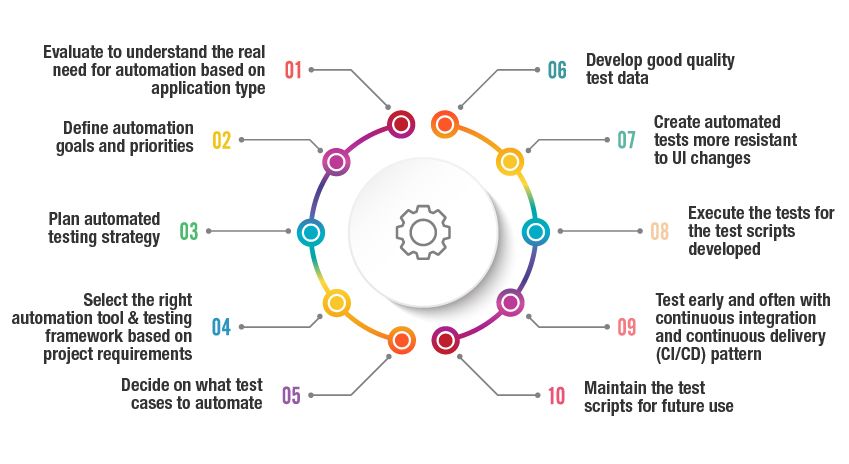 1. Evaluate to understand the real need for automation based on application type

5. Decide on what test cases to automate

8. Execute the tests for the test scripts developed

10. Maintain the test scripts for future use

What Is Selenium Automation Framework?

Selenium is a leading test automation framework that is portable and is used for testing web applications. This tool provides a record and playback feature for authoring functional tests.

Based on the application under test, these testing frameworks should be chosen in order to get the complete advantage of using these best test automation frameworks.

What are the types of tests to test automation frameworks?

Is there an intelligent and easy-to-use Test Automation Framework?

– Tool agnostic solution which can integrate with all leading tools of automation testing like Selenium, Appium
– Generates rich UI based output reports with details for different stakeholders
– Supports complete integration into the development pipeline with CI tools
– Supports integration with third-party tools like test, defect & version management
– Interfaces with Cloud-based providers for on-cloud test execution
– Integrated to deliver performance testing and can be used for functional testing

Why Should Enterprises Leverage Tx-Automate framework?

With the agile and DevOps practices on the go, there is a need for faster releases and quality products. Test automation using test automation frameworks has many advantages such as faster defect detection, reusable test scripts and minimum intervention by humans while running the test scripts.

However, for enterprises to take complete advantage of these automation frameworks, they should consider leveraging independent next-gen software testing services providers who have already developed fully functional test automation frameworks that needs a simple plug and play to ensure faster and continuous releases.

Q1. What is automation framework?

Ans. It consists of a set of processes, tools, and protocols that can be collectively used for automated testing of software applications.

Q2. What are different types of automation frameworks?

Ans. There are various types of automation testing frameworks. Some of them are listed here.

Q3. What are the components of Automation Framework?

Q4. Which framework is best for automation testing?