Technology has pushed boundaries that are still unbeknown to many across the globe. Automation, Artificial Intelligence (AI), Robotic Process Automation (RPA), Virtual Reality (VR), and more are proof that the technologies are emerging at lightning speed and precision. For example, with Test Automation, the aim of eliminating errors and saving time has been successful. Plus, the good news is the Test Automation is not the monopoly of big companies. It has become the cornerstone of most software development and testing organizations.

Software development and testing teams increasingly relying on automated checks to ensure their software conforms to a quality level that meets business and customer expectations. This is exactly why many companies have begun to embrace automated technologies. As per a report by Transparency Market Research, the global test automation market will likely to expand at a robust CAGR of 15.4% from 2017 to 2025 to become worth US$ 109.69 bn by 2025 from US$ 30.45 bn in 2016.

Automation is reducing the impending software issues and is deemed critical to the success of many software development teams that uses it. However, a common misconception is considering automation as a silver bullet for achieving instant quality. Teams start expecting 100% coverage, no maintenance, and supreme quality delivered overnight from their automation suites. Often there are many clear cases of executing Test Automation only to improve testing speed and quality.

The fact is automated test suites might not make your testing easier, sometimes, it can increase the maintenance burden of your suites. Maintaining a Test Automation suite without ambiguous targets leads to high cost, incompetence to acclimate to change, and failure to recognize the expected ROI. 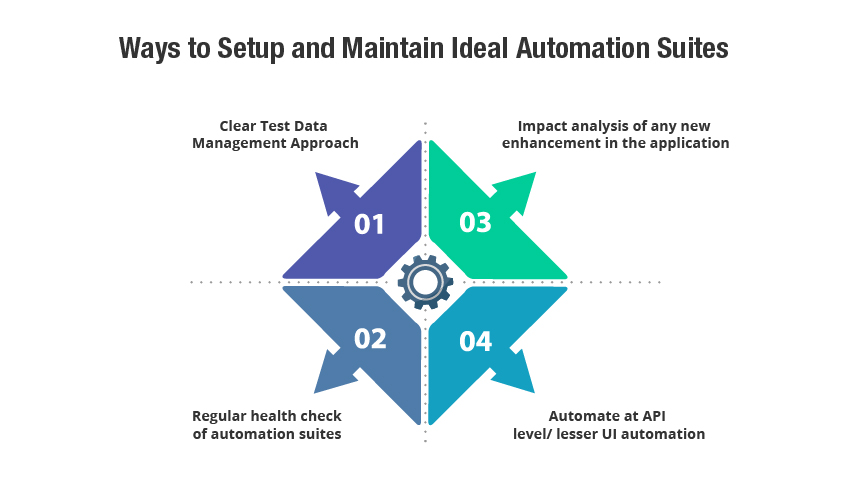 Ways to Setup and how to maintain automation scripts

One of the biggest challenges test engineers face is handling the test data in automated tests, especially in end-to-end test automation. Frequent changes in the data can make scripts fail. Every time a change is made to the application, it is important to refresh the database, change its status and run the scripts to avoid script failure. With this elementary approach, the refresh data source works with a few test suites, applications, and environments. Another way to avoid this situation is to build a new set of data every time you run the scripts. A clear test data management approach can help in maintaining the test automation suite and contribute to bring a clear ROI.

Even minor changes can impact an automation suite if the test engineer is not aware of those changes. To avoid any challenges while the tests are running, get regular health checks of the automation suites. Regular checks will ensure automation suites perform as anticipated and give the best results.

3. Impact analysis of any new enhancement in the application

Impact analysis is a significant aspect of responsible Requirements Management. It provides an accurate understanding about the implications of a proposed change in an application, and how it may affect the application. This helps the teams make informed business decisions about the relevant changes to approve. The analysis inspects the proposed change to recognize modules to be created, modified, or rejected and to estimate the effort associated to implement the change. Missing on an impact analysis will not change the size of the task, but it is advised to avoid turning scope into a surprise. Based on the analysis, QA should be planned to update the impacted automated scripts during the sprints itself.

UI tests remain the most common type of automation that the test engineers perform. Most agile teams prefer UI-level automation. However, within a few months they start the automation, the teams often realize the cost of maintaining UI-level tests is comparatively greater than the benefit from the automation. So, test engineers are advised to automate their application at the API level because performing automation at application code not just saves on TCO but also increases the durability of scripts.

To enable your testing efforts, automation of the test suites will be the best solution. However, maintaining this Automation Suite can be a challenge. It is vital to define goals for Test Automation first. Whether you need to accelerate testing to improve time to market, or to test more within the existing time frame, a good Test Automation design can help you achieve goals and intended ROI for automation.

TestingXperts (automated testing company) with its well-thought-out strategies have evolved its practices and have surfaced as the leaders in creating and maintaining best automation suites for its clients. Connect with us to know more about our Test Automation capabilities and how we can help you transform your business with our testing strategies.

Q1. what are automation scripts?

Q2: How to write automation scripts?