Why API testing is critical for today’s Business applications?

In today’s competitive world, businesses should understand the fact that only the best applications thrive well and continue to attract a lot of traffic. This prevalent concept has made software application development and software product development vital for all businesses across industries.

The Application Program Interface (API) is a set of processes, protocols, routines and tools for building these critical software applications. It is rather an interface that allows software applications to communicate with one another and is mainly used while programming the graphical user interface (GUI) components. There is a lot of significance as an API specifies how its software components should interact with each other.

APIs are essential for creating an effective and connected experience for customers and thus businesses are beginning to realize their value. Understanding the depth of its role with respect to applications, hence the importance of API testing has come into place.

This specific testing involves testing of the application interfaces directly as part of the integration testing to determine if the application perfectly meets the expectations for functionality, performance, reliability and security. API testing is one of the challenging test practices in the software and QA process as it reveals the bugs, inconsistencies, and deviations from the expected application behavior.

What Does API Testing Revolve Around?

– To ensure the APIs work as expected

– To specify and ensure the application can handle the desired load

– To enable a better user experience

– To ensure easier expansion of applications

– To make sure the API provides the required functionality

How is API Testing Done? 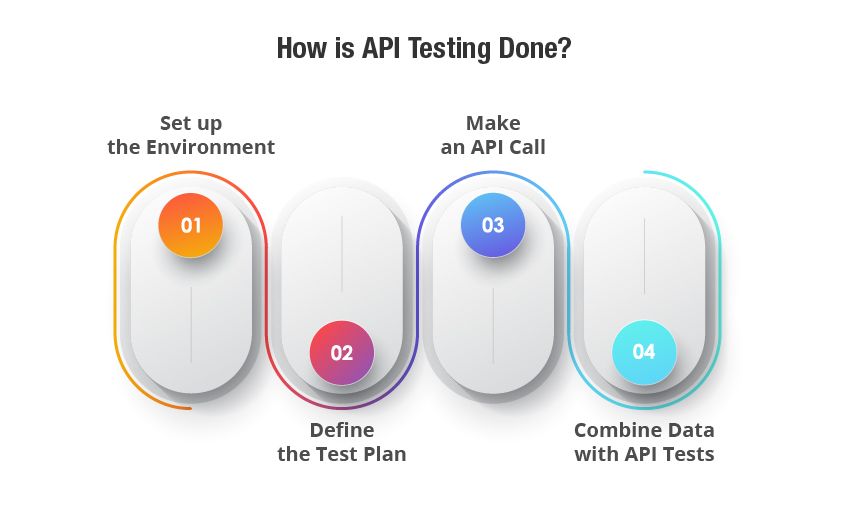 1. Set up the Environment:

Initially setting up of the environment should be done with the required parameters that need to be configured for the given API. This includes configuration of server and database as per the API requirement.

The test plan varies based on product type and API. But a solid test plan should cover all scenarios in depth, clearly define the priority of scenarios that need to be tested. It should also include some of the common testing types like unit, integration, security, performance and third-party API tests.

It is important to make an API call to ensure there are no broken links in the process of testing as it is crucial before proceeding with the actual testing.

This step helps to make sure the interface functions as expected with the provided parameters after being configured.

Are these API’s Really Business Critical; How does API Testing Play a Key Role?

The interface is the heart of any application and if the product interface is not good enough, then it shows an adverse effect on its viability. It is a known fact that applications are getting more complex due to the varying end-user needs and in order to meet them, the API’s have become vital tools for businesses across every industry segment. Hence, it necessitates the need for effective API testing at first hand.

Moreover, there is a significant chance that the API’s can be hacked. It is also unfortunate that whenever resources are exposed to the internet, it is likely to be attacked in some way or the other. Hence integration testing and API security testing is critical for all businesses today.

This testing not only ensures security standards but also confirms that the overall system will perform well even under varying loads or network conditions.

Joe Colantonio, an eminent testing domain blogger in his blog on “Why API Testing is Important,”  justifies the importance of API testing, saying that API test process is important with the agile practices on the go and with the internet of things (IoT) all around.

He further adds that agile has increased the frequency with which applications are released which in turn has created an increased demand for new ways to quickly test them. GUI tests are typically too slow to get the test coverage and since API tests do not rely on a User interface(UI) to be ready, thus they can be created early in the software development process.

However, to achieve the best results with API test, it is essential for organizations to follow a set of best practices.

What are the best practices for API testing? 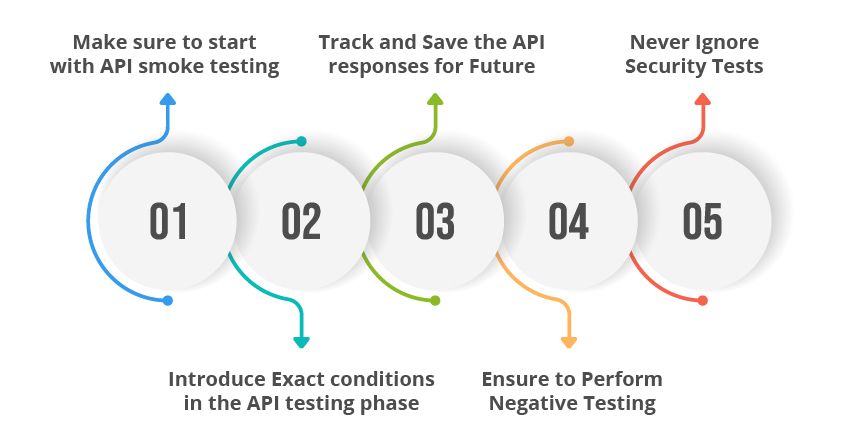 APIs have been the core for applications and should be continuously analyzed as these replicate the complete application performance. So, businesses that underlie on API integrations should continuously follow certain testing strategies to maintain hassle-free data access for the customers and make the application responsive in every aspect.

Track and Save the API responses for Future: While practicing the API testing, the development and testing teams need to track and save the responses obtained from the API test method. When an API undergoes several changes, there are many chances for the API to result in errors. In such scenarios, the already saved responses from the API will help the teams to examine and figure out the reasons which are causing the errors.

Ensure to Perform Negative Testing: In API testing, testing and monitoring the data for a positive response is a constant practice. Along with this, the development teams need to perform negative testing as this method will benefit to validate whether the API is able to respond with an error message or stop with a crash. This will improve the efficiency of the application and help the app to respond in scenarios where invalid data is provided.

Following are the top 6 API tools:

Postman was initially launched in the market as a Google Chrome plugin. The main aim of Postman is to test API services. Postman is also considered to be a great tool for performing exploratory or manual testing.

Web services REST and SOAP APIs use the platform of SoapUI for carrying out testing activities.

Apigee is a cross-cloud tool. The features of the Apigee API testing tool can be accessed by users through an editor such as Swagger. API performance can also be measured and tested properly through this tool.

It has always been difficult to create scenarios for API-based BDD tests. But, with the Karate DSL API testing tool, users can easily undertake this without the need to write down step definitions.

This API testing tool was developed to perform load testing. As of now, it is well-known for functional API testing. The latest version of JMeter which is “5.4” was rolled out in December 2020 and is capable of additional bug fixes and core enhancements.

Undoubtedly Robust API Testing is the Future; But WHY?

It tests the API’s for their capabilities to integrate, stand out to expected functionalities, equally weigh aptly for performance parameters and meet up the security standards

– The robust API testing practice helps to verify code, discover the defects at an early stage and evaluate any unwanted code

– With API’s, integration of tools or programs can happen at any point of time to enhance the experience and functionalities of the software

How can Testingxperts help you with Effective API Testing?

Pure play testing services providers like TestingXperts have a good number of expert API testers and provide the perfect environment to test your application interface effectively and efficiently as they have:

– Ample exposure with the automation of API test cases

3. Types of Software Testing You Must Know

5. Automated UI Testing for Web: Challenges and How to Overcome Them

7. Why UAT is Necessary for Businesses?