How AI Can Be Leveraged In All Aspects Of Testing

QA has become a critical enabler for businesses that are in the digital space. To achieve digital transformation businesses should embrace the latest technologies in their software development process and build a strong data engineering foundation to fuel innovation. In this article, let’s look at how Artificial Intelligence (AI) can be leveraged in various aspects of Quality Assurance (QA) and Quality Engineering (QE), to increase speed in software development and ultimately help businesses achieve digital transformation.

According to the latest World Quality Report 2018-19, AI is going to be among the biggest trends in QA & testing for the next decade, and organizations will need to develop a strategy around it.

Adopting Artificial Intelligence and automating software testing has become inevitable, especially to get up to speed on the state of QA.

How does Artificial Intelligence work?

AI uses machine learning to give a machine the ability to learn and respond. AI works with the combination of a large amount of data and intelligent algorithms with an underlying fast and well-defined iterative process. AI is a field of study that includes different methods, theories, technologies and includes several subfields such as Machine learning (ML), Neural Network, Deep Learning, Cognitive Computing, Computer Vision, and Natural Language Processing (NLP).

The concept of Artificial intelligence is classified into two types based on the capabilities and its functionalities.

Classification Based on AI Capabilities:

It is one of the streams in AI, that is prominent to perform single tasks with intelligence. Since it has limits defined, it cannot perform beyond its limitations. This makes intelligence also known as weak AI.

General AI is the type of intelligence that can perform any task with similar intellectual efficiency as humans. The idea behind General AI is to have systems which will be able to think and react like human.

Classification Based on AI Functionality:

This type of machine is the basic type of AI machine. These do not store any memory of previous actions or future actions. The machine types only work by considering the present scenarios and reacting to them with possible actions.

This machine type stores its previous memories and experiences for a shorter period of time as they have a limited time to store data.

These machines are expected to be super intelligent and have their decision-making functionality. Though these are not in existence yet, the hypothetical concept makes Self-awareness AI can be seen as the future of AI.

All the above-mentioned AI types and methodologies can be effectively leveraged to ensure effective software testing. Some of the significant benefits of AI in testing are given below. 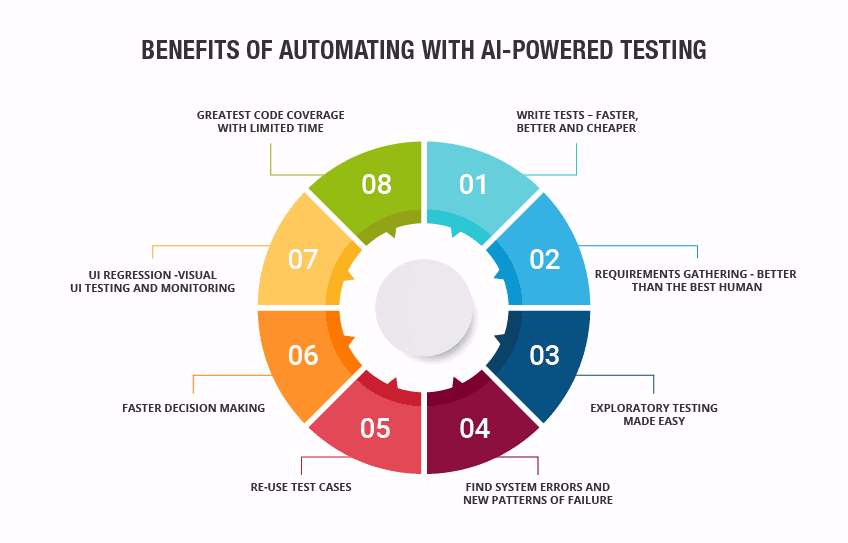 Developing patterns and test cases to test how an application performs is time-consuming if it is done by a human. AI-based tools can automatically write tests for an application or system by spidering, i.e., collect data, capture screenshots and do more. Hence, AI-based testing cut costs and save time.

The challenge that we commonly see in the software development and testing process is our human inability to fully understand and review the requirements. The intelligent assistants understand software requirements and limitations of complex systems, which would support better requirements gathering than a human in most cases. AI also helps in defining test requirements based on the latest trends and marketing competitiveness.

Example: To develop an eCommerce site, AI can help collect and review requirements based on competition.

Since AI-based testing is trained on the collective knowledge of all people that work in the team, it helps in identifying various scenarios effortlessly. The intelligent assistants are not just used to perform testing, but also used as background tools that capture test data, and user behaviours by navigating through an application or system and recording default test cases.

When it comes to analyzing logs, AI-based analysis is already here. With AI, data-mining logs for errors and performance, and identifying the root cause of problems are made easy. Each call can have multiple sub-calls, where leveraging AI can seamlessly track and identify which part is consuming more time. Al-based tools conduct performance analysis as well as ensure the security of an application or system as they identify any potential attempts of unauthorized access to the system.

AI-based automation helps in creating well-written test cases and reusing these test cases much faster and better since the artificial intelligence or ML-based tool crawl system or an application, collects its crucial data by capturing screenshots, measuring load time, and analyzing basic UI elements and more.

In this DevOps world, most test decisions, such as what tests need to be performed and the impact-analysis decision need to be taken very quickly. It means people need to think faster, better and smarter. Leveraging AI-based tools, instantaneous and effective decisions can be made and applications can be tested faster.

To make sure the recent code changes have no effect on the existing features is a painful thing. The functionality of an application plus user satisfaction plays a crucial role because for a user the backend API doesn’t matter. What matters the most is the User Connect. Machines can be accurate than humans here, and analyze outcomes of regression testing more effectively and effortlessly.

What are the AI test automation tools?

AppVance: This tool uses AI for generating test cases as per the behavior of the user. It is the only test automation system providing level-5 autonomy and helps to generate AI-scripting tests 100k faster than humans. Also, it is prominent in finding more number of bugs.

TestCraft: This tool is a leading AI test automation tool for monitoring web applications. Also, this tool is used for performing continuous and regression testing on applications. The efficient AI technology is prominent for eliminating the cost and maintenance of the application.

Functionize: This is a cloud-based automation testing technology tool. It helps the testers to perform load, functional, and performance testing. Also, it uses AI and ML for reviewing several components such as maintenance, test creation, execution, diagnosis, and analytics.

Testim.io: This tool helps to create, edit, run, and maintain end-to-end tests. Also, it makes the testing to be scalable, faster and aligned as per the work followed by the teams. Also, this tool is efficient to get integrated with several tools such as Jenkins, Jira, Slack, SauceLabs, Applitools, etc.

While AI-based testing is going to be smarter as it automates software testing, there is still a need for progress in implementing the AI-assisted testing effectively for business. AI today merely automates testing activities based on the data provided by human testers. So, human testers need to understand the significance of their ideal role, to be the Automator and to leverage AI-based automation techniques that will shape the future of software testing in various or all aspects of the testing.

For more information on implementing AI-assisted testing, contact us.