In today’s technologically advancing world, the usage of mobile apps is continuously growing, and these apps have become an indispensable part of human lives. Mobile apps provide a great convenience to users with seamless on-the-go transactions for various activities. More importantly, businesses should ensure their mobile apps are user-friendly, scalable, and fully functional to deliver a great user experience (UX).

An overview of Mobile Test Automation 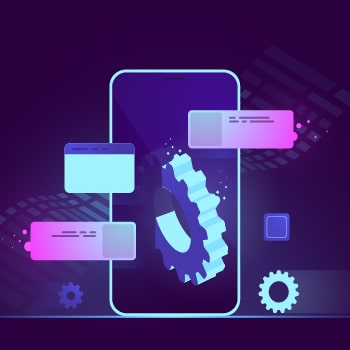 Test automation is a software testing technique wherein automated software testing tools are used for testing different types of mobile apps developed for handheld devices. Usually, there are three main types of mobile apps, i.e., native, hybrid, and web apps, and test automation can be performed for all mobile app types. Mobile test automation ensures the proper functioning of these apps and improves their quality, usability, performance, security, and reliability. There are many benefits to leveraging automated mobile app testing for businesses. 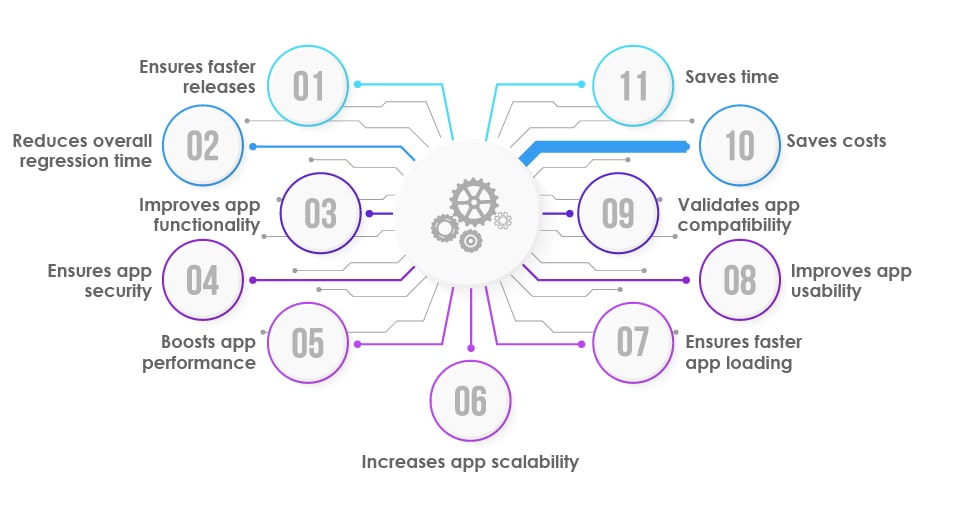 Automated mobile app testing involves thorough validation of app functionality and ensures there are no functionality-related errors or bugs. Thus it provides the functioning of mobile apps.

Mobile app security loopholes can lead to customer credentials/identity loss and bring monetary and reputational loss to businesses. By automating the security testing of mobile apps, security loopholes in an app can be easily identified and removed.

During automated mobile app testing, several performance tests are conducted to ensure no performance bottlenecks exist in an application and that the app performs well under all user loads.

Mobile apps should be compatible with all OS, browsers, and devices to deliver a great UX. Mobile compatibility testing ensures app compatibility across all device-OS combinations.

Test automation of mobile apps save businesses from sudden app failures or app crashes, which saves a lot of the expenses for businesses and protects the brand reputation.

What are the basic considerations that should be followed for mobile test automation? 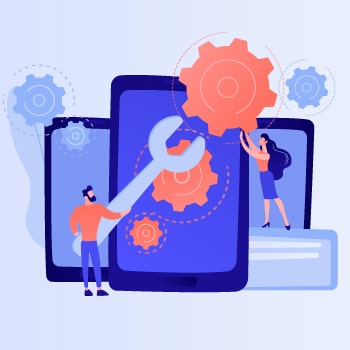 •Test mobile apps on real devices along with simulators and emulators

•Test mobile apps for varying screen dimensions and other specifications

How to automate mobile app testing? 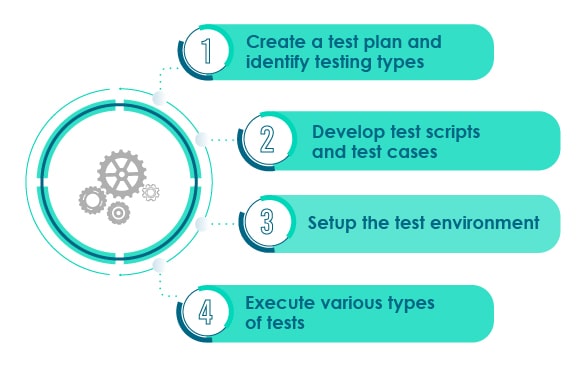 It is essential to create a test plan by choosing the target devices with varying screen sizes for mobile app testing. It is also necessary to determine what type of testing is to be conducted on the mobile app, such as front-end, back-end, functional, etc. Testers should identify whether the mobile app under test is a native, hybrid, or web app.

The next step is to develop the test cases for every application function. Test cases should also include battery usage, app speed, memory, etc. Automated test scripts should be developed, and these reusable automation test scripts can be changed according to the project requirements.

It is important to download, install and configure the application on the testing device to set up the test environment. Also, establish the test version of the app before starting the actual mobile app testing process.

Finally, testers should execute the tests leveraging various test automation tools. There are different types of tests that are executed on mobile apps. 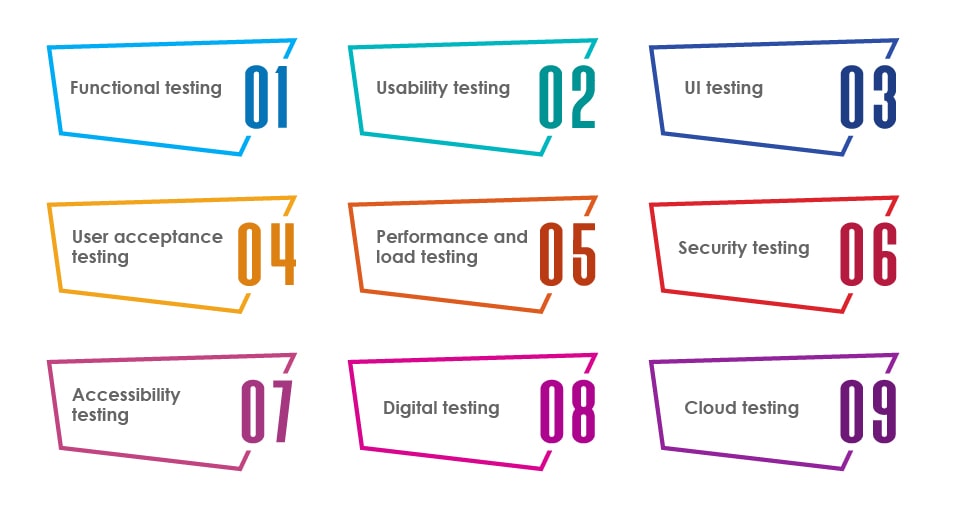 In this software testing type, the functional aspects of the software are validated to ensure the app functions properly under all conditions.

The main aim of this testing type is to ensure an app delivers a great UX to users.

This test ensures users face no difficulty accessing the app. It also delivers e a highly responsive UI of an app.

The main aim of acceptance tests is to ensure an app is acceptable to end-users. During this test, end-users are involved in the testing process, and their reactions or responses are recorded to further improve the quality of an app.

The main aim of this test is to remove security flaws or loopholes from an app to ensure its protection from cyberattacks.

This test is performed to ensure an app complies with accessibility guidelines such as WCAG 2.1, 2,2, ADA act, STANCA act, etc. This software testing type ensures an app is equally accessible by all people, including people with specific disabilities such as partial blindness, motor limitations, cognitive disabilities, etc.

This testing type covers the entire gamut of software testing and is essential for digital apps. It ensures the effective functioning, performance, security, usability, and accessibility of digital apps.

This test ensures an app’s proper functioning, security, and performance under cloud networks.

However, while executing the above mobile tests, the testers face some challenges. Below are details about those challenges and how to overcome such challenges.

What challenges do testers face while performing mobile automation testing?

There are various test automation tools, but which test is best for a particular mobile app or project is always tough to decide.

One of the major challenges testers face with test automation is false positives and false negatives, resulting in flaky tests.

Another challenge that testers face during test automation is the lack of proper team collaboration. This usually happens when developers and testers work separately on a project.

How to overcome the above challenges with best practices for automated mobile app testing? 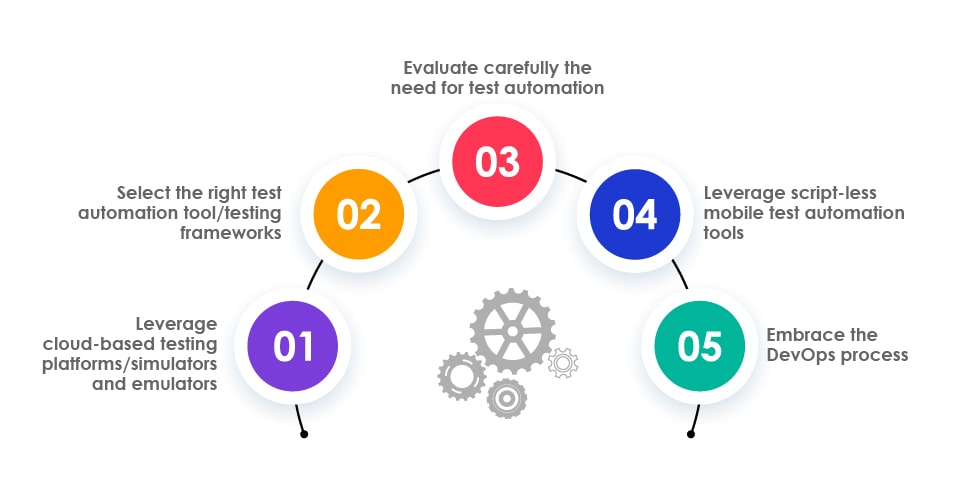 Testers can overcome the challenge of testing mobile apps on various device-OS fragmentations by leveraging cloud-based testing platforms and using simulators and emulators.

Testers can overcome the challenge of selecting the right automation testing tool by leveraging industry-leading open source and commercial tools by properly analyzing their need and proper project evaluation.

Testers can leverage advanced script-less test automation tools or even reuse the test scripts developed previously by some testers for similar tests to overcome the challenge of test script creation.

It is preferred to embrace DevOps, as it breaks the silos between developers and testers and ensures collaboration between them, resulting in successful test automation of mobile apps.

It is a continuous testing platform used to design automated, functional, and end-to-end software tests. This testing tool allows codeless testing for any mobile app with the help of a simple drag/drop functionality. Tricentis Tosca allows testing of native, hybrid, and web applications on iOS and Android devices, including mobile cross-browser testing. It allows scaling mobile testing efforts by enabling testers to run tests in the local environment or seamlessly execute tests in the cloud on any device, simulator, or emulator.

It is an open-source automated testing tool for testing mobile applications. This tool supports the automation of native, hybrid, and mobile web applications built for iOS and Android. This tool uses vendor-provided automation frameworks and is based on server architecture. Appium released its latest version in January 2020 – Appium 1.16.0, which allows beta support for flutter, iOS simulator geolocation setting for testing, and Safari weblogs capabilities.

It is one of the easy-to-use tools, and it helps in automating tests for mobile apps, desktop, and web applications. This tool provides maximum test coverage with a hybrid object and visual recognition engine. It allows scripting in various programming languages, like Python, JavaScript, Delphi Script, C++Script & C# Script.

It is an all-in-one automation testing tool, and it powers on a selenium web driver with capabilities like UI object recognition, intuitive interface, and full IDE. This tool also has a record and playback feature which helps in easy automation. Ranorex allows cross-platform testing and is used for end-to-end testing on web, desktop, mobile, and APIs